We stood outside this political CPAC / Trump convention and it was a sad display of idolatry and false America Churchianity. The truth of God / the gospel went out to so many and we pray it will bring a harvest in time.

Watch many videos of it here and see how corrupt/lost the USA has become. Note: we edited out the worst of the angry mocking to be shown on a later post for a teaching moment for street preachers soon. 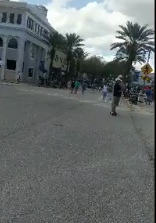 We had an awesome day street preaching at a outdoor art festival in New Smyrna Beach, Florida today. What a joy to take the gospel to thousands of souls and lift up Christ! It was a usual day street preaching but; it was also filled with some "very sad unusual things" as well. (esp 2 very young boys hassling us and calling police on us)

Here is a list of what we faced today in the 4 hours we preached there:

* A security man was angry and called the police even though we were on the sidewalk and had every right to preach there. (the police confirmed we were legal)

* An angry restaurant owner called the police on us. Said we were upsetting children preaching about Jesus shed blood and sin, abortion. (the police confirmed we were legal)

* We were outside their festival until the policeman said we can't use the amplifier but could go anywhere without it. So great! We turned off the amp and we went in among them it was awesome. (the police confirmed we were legal)

* A man was angry about it and got in my face over it.  The police there took care of him and told him to leave us alone. (we do not follow or harass anyone. If you don't like my message, just move on!)

* A man told me that the gospel is just Romans 10. (I explained the full path to eternal life and all that he lacked)

* A young boy (about 12 years?) got mad and was riding his scooter at me and grabbing my sign. He then got in my face when I video taped him as proof. (I told him he needs a spanking and that we loved him)

* Another young boy with him (the same age) got very upset at the preaching / me just calling out homosexuality. (I mentioned that a few times but preached on many sins but that sin, convicted him greatly)

* The two boys called the police and a school teacher who saw it all told the police the true story of what all went on. (the police confirmed we were legal)

* An older man agreed about the youth being out of control and needing discipline and his wife rebuked the trouble making youth.

* A music man said he was happy in his flesh and tried to mock us.

* A very lascivious harlot dressed young woman was posing herself in front of us every time we came around that area. She mockingly asked if we don't sin and I told her to repent. She got mad then posed in bad positions and we avoided her as a mocker.

* A half dressed homeless looking man smiled, agreed and asked for a gospel card.

* A Presbyterian man stopped to talk but was trying to distract us and defended sin.

* A kind man brought us cold water and said he agrees with what was said about 'churchianity' and he took a gospel card.

* Two more police (called by the brat youth) tried to get us to stop and when I went into the details of what is being preached (repentance of sin) as soon as I said we must call men out of idolatry, lying, worldliness and homosexuality (and I mentioned many sins all day)  they both walked off and were upset at the homosexuality. They wanted me to adjust my preaching to please a 12 year old who did not like homosexual ways called out. That is not gonna happen!!

* An older woman came up and said that many people are agreeing with what I preached.

* An LGBT supporting young woman asked us about homosexuality and when I said the bible calls it sin but: you can be redeemed from it, she walked off rejoicing/dancing that she's in sin, mocking God's Word.

* A mocking, demonic hippie looking man followed us around taunting and mocking us about his..... many gods.

What a day it was folks!

You can go here and see many videos that will verify it all and edify you as the gospel goes out into the dark world:

We were exhausted afterwards (once all the editing was done) but; we must be ready to go as tomorrow we preach to another big event.

Jesus Did NOT Speak On Money Most of All

I recently heard a modern pastor (that I was testing) say that Jesus spoke about money more then any of thing. That is a bold face lie and in this audio I expose that. I also teach that even when Jesus did speak on money; what His main purpose really was. Listen in and test yourself to what God's Word says on money and on what Jesus focused on most of all.

Dealing With Security and Police 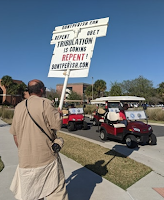 We preached on a state college campus in Florida and within 5 minutes, the security guards were all over me. This is where you need to have wisdom and knowledge; all you potential street preachers.

They told me I was on private property and I had to leave asap! Because I did my homework; I asked them had they not heard of state law SD4? They said no and so I educated then that any Florida state college is now open to free speech on any sidewalk on campus. They instantly backed off, called their boss and all left me alone the rest of the day. At one time they were only allowing free speech in tiny hidden restricted areas but now; we roamed the entire campus and they cannot stop us, it was awesome!

Men you need to know that Florida, Missouri, Tennessee, Kentucky, Utah, Virginia, Colorado and North Carolina all have such laws so you can preach freely on any state college campus. Go while we have such freedoms as soon they will end it all!

When it comes yo the law; be kind, be respectful but be firm and know the law so you can glorify the Lord. God's word tells us knowledge is power so study the Word to be approved and know the local laws then use it to your advantage. 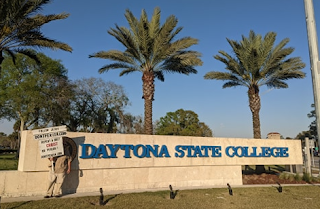 We had a awesome afternoon street preaching at a local state college as it needs the light of Christ vs its man made, false, sinful ways and the darkness it keeps. Watch many videos of it here: 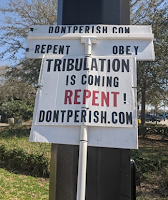 We went out flying gospel signs on a busy corner and I did a video about the coming tribulation that Jesus spoke of.

Watch it and get ready!

Email ThisBlogThis!Share to TwitterShare to FacebookShare to Pinterest
Labels: Tribulation

Steadfast and Not In Vain

I felt the need to make a video about steadfastness in Christ as it is very easy to fall into being discouraged in these last days. Listen to this audio that uses God's Word to lift the body of Christ up to be steadfast as; it is NOT in vain!

Email ThisBlogThis!Share to TwitterShare to FacebookShare to Pinterest
Labels: Steadfast and Not In Vain

Witnessing and Its All About the Blood 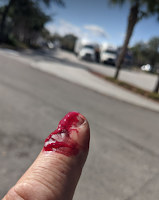 Here are just some of the latest witnessing opportunities to edify and encourage you that God's truth is going out!

*I took a walk and met a young trucker from Georgia who had some mechanical issues. I helped him and cut myself in the process. He got the gospel good news about Jesus shed blood/resurrection!

*I met a man from North Carolina who had broken down by our camper. We worked on his truck and he got the gospel!

*A young gang banger showed up and I witnessed the gospel to him.

*Met a van dweller from India and the gospel went out to him.

*We met a man from Kentucky and I preached the gospel to him.

*A couple living in a van from Tennessee showed up one day and I preached the gospel to them..

*A older lonely man admitting he is alcohol addicted was counseled ad he got the gospel.

*A man camped next to us and he just lost his best friend to death and he got the gospel good news.

*A lady approached us for money and then she got the gospel.

*A trucker was thanked for his great job and he got the gospel.

*We found a wallet and the police who came to get it, got the gospel.

*I met a guy with a flat and offered him my compressor and he got the gospel.

*In the store; an elderly lady got the gospel .

*Many workers at the gas stations, got the gospel

*At a festival several ladies got counsel and the gospel .

*We preached at the Super Bowl, Daytona 500 and a Outdoor Festival and many thousands got the gospel.

It seems God has many events/appointments for us to meet and then share the truth with and we are so blessed! We do not know what they are doing with it but we trust in the Holy Spirit to convict and guide them. Then we are here if they need help in their walk as is dontperish.com 24-7!

See the gospel below and remember; it is all about the shed blood and His resurrection!

Here is a teaching audio where I totally expose this man made false doctrine called Limited Atonement using God's Word. I will be exposing all 5 points of this heretical theology so stay tuned for more to come. Listen in and be blessed:

Go here to see my main article on TULIP exposed with all 5 points eventually to be exposed there: 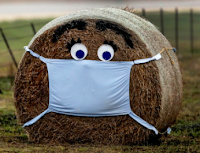 As we travel the country preaching the gospel in the streets during this covid plandemic; I see massive hypocrisy about the wearing of masks to save lives. In this video; I talk about how I too want to save lives but I do not believe the culture or government is very serious. Until they address the areas that KILL far more people then this plandemic virus; I cannot take them serious at all. It appears this is far more about control/taking freedoms then it is about saving lives in the end. Watch the video and be blessed:

We went out flying gospel signs on a busy corner and I did a video about the coming tribulation that Jesus spoke of.  Watch it and get re...