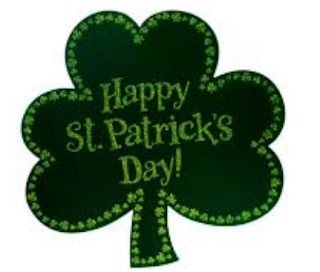 As the true spirit led follower of Christ walks through this world; God's Word reminds us how we are to live. We are not to follow whatever the culture does but we are to follow our Lord's example.

Do not be conformed to this present world but be transformed by the renewing of your mind.
Romans 12:2

Man in his fallen state; has created many pitfalls and deception that can ensnare a person unless they are in the Holy Word and actively discerning all of their steps daily. The only way to be safe is to stay in the Word. Psalms 1:1-2 says:
Blessed is the man that walketh not in the counsel of the ungodly, nor standeth in the way of sinners, nor sitteth in the seat of the scornful. But his delight is in the law of the Lord; and in his law doth he meditate day and night.

Since it is March, once again it is the time when many religious folks (roman catholic, lutheran and others) go about celebrating the holiday of St Patrick's Day.  Keep in mind the word holiday comes from the meaning of holy days. Well there is nothing holy about this holiday I assure you.

So how can we know if we should partake in such an event? In line with the biblical testing (1 Thess 5:21) that we are to always do; let's us ask some questions.

1) Is this a true biblical holiday and is it approved of by God?
2) Did the Apostles of Jesus practice it?
3) Who was Patrick?
4) Who instituted it as a holiday?
5) Who does it honor?
6) What does it consist of?

Our discernment blog is not here to do vast research for you and give lots of references or places to go for all the info. We want only to raise the issues and questions before you. It is up to you to do your own deep study and research both in God's Word and in history to verify what is true for yourself. The bible says (2 Tim 2:15) "study to show yourself approved" so we cannot do that for you. What we will do is give you a brief overview on important topics to get you headed in the correct direction. Let's answer those questions that we have raised about St Patrick's Day.

1) There is not one shred of biblical support or evidence to promote or support this holiday. It is not mentioned in the bibles pages and Patrick was not a man who was even alive in the biblical times. There are many verses that would condemn such a holiday because God's true people are not to follow the lifting up of men, fables and lies. This man made holiday has many things tied to it that are forbidden in God's Word. Here is a very good verse that covers this false man made holiday that God does not approve of.
Colossians 2:8
Beware lest any man spoil you through philosophy and vain deceit, after the tradition of men, after the rudiments of the world, and not after Christ.

Note: This day is full of myths, lies and vile traditions like getting drunk and false ways like 4 leaf clovers and little green leprechauns.

2) None of the Apostles or Jesus did or ever would have celebrated something that was a pagan invention like St Patrick's day. They lived and breathed to serve God and they followed His Word alone not man's traditions. If you are His, you are to follow Him and not man's inventions and vain traditions (when it comes to spiritual things most of all). We live by His Word, not man's ways.
Matthew 4:4
Jesus said: Man does not live by bread alone but by every word out of the mouth of God.

3) It is easy to find much information about who Patrick was. He was a real man who lived in Ireland who as a youth was kidnapped for years and he then went on to be a well known claimed Christian missionary in the 5th century AD. While there is no evidence of the many antics and fables connected to his name they have been added to this day by man and his strange imagination. No man is to be lifted up and honored in such a way and certainly falsehoods and lies are to be rejected not embraced and celebrated for fun.

Rev 22:14-15
Blessed are they that do his commandments, that they may have right to the tree of life, and may enter in through the gates into the city. For without are dogs, and sorcerers, and whoremongers, and murderers, and idolaters, and whosoever loveth and maketh a lie.

4) This false holiday was started and expanded by the pagan roman catholic religion that has made it a standard practice to make special holidays to lift up (those who they deem are special men) and make then "saints". Two important notes here. First, Patrick was never a roman catholic that we can verify (he lived before their papal system was even fully established) and two; God's Word says everyone who is born again in Christ and trust in Him are His saints. To say a group of men ( the roman catholic organization) can decide who is and who is not a saint is close to blasphemy against the Lord and His Word. It must be rejected out right for God's glory.

Jude 1:3
exhort you that ye should earnestly contend for the faith which was once delivered unto the saints.

5) Holidays such as these are nothing more than events to honor and lift up mere men before others. We are not taught anywhere in the bible to lift up anyone other then Jesus Christ our Lord and Creator. The Apostle Peter who himself walked with Jesus and was used in a big way to help start the Christian New Testament church, even stopped others from lifting him up noting; he was just a man like them. Sadly the roman catholic faith even teaches people to pray to these so called special saints and that to is a grave error against Holy scripture. It must be rejected as unbiblical and wrong.
Acts 10:26
But Peter took him up, saying, Stand up; I myself also am a man.

6) As we have stated; the roman catholic religion has many error filled traditions and practices that they have pasted on over the centuries and this is one of them. This holiday will include special masses and prayers to St Patrick and well as feasts and such. Also, to both the roman faith and those who are outside of their religious circle, this day has become a big drinking fest and just a fun time to dress up like the world, party and walk in parades and such. Much of it is about corned beef, cabbage, green beer, leprechauns and 4 leaf clovers that many say mean good luck.  I have seen many a person that partakes in this event get carried away with the carnality and silliness of it all. What does God's Word tells us true people to be about in their lives?

1 Peter 1:15
But as he which hath called you is holy, so be ye holy in all manner of conversation

I would encourage you (based on this biblical info and if you claim to be following Jesus Christ) that you should avoid this pagan holiday and tell others the gospel truth so they can be set free from its carnal grasp. The apostle Paul told us how we can be received of God in this well known verse below:

2 Corinthians 6:17
Wherefore come out from among them, and be ye separate, saith the Lord, and touch not the unclean thing; and I will receive you.

God has shed His amazing light unto us in Jesus Christ and so why walk in the darkness of error and pagan ways? Rejoice in His name and walk worthy of Him till he returns for His bride.
2 Corinthians 4:6
For God, who commanded the light to shine out of darkness, hath shined in our hearts, to give the light of the knowledge of the glory of God in the face of Jesus Christ.

Please reject this and any other event that is NOT rooted in and all about the Living God according to His Holy Word and ways, not the vain traditions of men. (Mark 7)

See our biblical resources below:


Here is the biblical gospel:

Answering Homosexual Questions in The Streets

As I am out street preaching, I often get people bringing up homosexuality and asking me about it. I thought I would give you some thought...